Educated in Norwich and at Birmingham University, ERIC CROSS joined the staff of Newcastle University as Lecturer in Music. After periods as Head of Music and Dean of Arts he was Dean of Cultural Affairs for 16 years and is now Emeritus Professor of Music and Culture. His main research area is the Italian Baroque, with special reference to the operas of Vivaldi; he has prepared scores of several complete Vivaldi operas for performances in New York, France, Denmark, Germany, Italy and Poland – most recently for La Fenice, Venice in July 2020 – and in England by the English Bach and Buxton Festivals. He has edited works for recordings by Richard Hickox, Emma Kirkby, James Bowman, Julia Kogan and Catherine Bott, and conducted the first UK performances of Arsilda, Regina di Ponto and Tamerlano as part of the Newcastle Early Music Festival, of which he is co-founder. 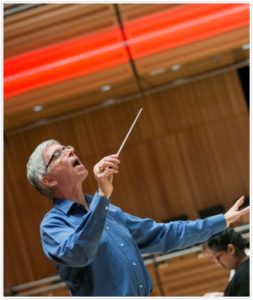 Eric has written and presented numerous illustrated talks in the UK and abroad, and has broadcast on BBC TV, ITV and BBC Radio 3. He has conducted the Newcastle upon Tyne Bach Choir since 1984 in works ranging from Bach and Handel through Cherubini and Bruckner to Tippett, Britten, Maxwell Davies and MacMillan. As well as specialising in the performance of eighteenth-century choral works with period instruments, the Bach Choir promotes unjustly neglected works from various periods, as well as commissioning new works from composers such as Wilfred Josephs, John Joubert and Will Todd.

Recent joint concerts with Newcastle University Symphony Orchestra, together with the Bach Choir, include Mahler’s Eighth Symphony, Elgar’s The Dream of Gerontius and The Kingdom, Verdi’s Requiem and Britten’s War Requiem at Sage Gateshead.

We’ve missed you Anne-Marie, but appreciate singing in a vocal vacuum is not everyone’s thing. Hope it won’t be too long before we can begin in-person rehearsals once again.

It’s good to be back! Huge thanks to the brilliant @hardyjp for his technical wizardry and enormous hard work in compiling the videos. Thanks also to Bill Tarpy, Lindsay Cross, our rehearsal pianist, and of course to Eric Cross for making all this possible https://youtu.be/DCG_MYqzLgA